Home I Blog I Is Donald Trump’s honeymoon with investors over?

Is Donald Trump’s honeymoon with investors over?

With Trump now inaugurated as President we are at the point where that optimism is being tested.

Since the US election last November US and global shares rallied around 8% and Australian shares rallied around 12% to their recent highs. Related to this the US dollar, bond yields and some commodity prices also pushed significantly higher. Optimism regarding Donald Trump’s pro-growth policies were not the only factors playing a role in this rally – global economic indicators have improved significantly in most regions – but they certainly played a role. With Trump now inaugurated as President we are at the point where that optimism is being tested.

Donald Trump has only been President for two weeks but it seems that he has already done a lot with numerous major announcements. So far the key moves relate to: minimising the economic burden of Obamacare; reviewing new regulations; preventing non-government organisations that perform abortions from receiving Federal funding; withdrawing the US from the Trans Pacific Partnership free trade deal; freezing Federal hiring; moving towards approving the Dakota and Keystone XL oil pipelines; speeding up approvals for high priority infrastructure projects; reducing regulatory burdens facing manufacturers; directing the construction of a wall with Mexico; support for a “border adjustment tax”; and various restrictions around immigration – in particular a 90 day ban on travellers to the US from seven majority Islamic countries.

While these moves are basically consistent with his campaign policies, some have created considerable consternation in the US and globally. And Trump and his teams’ “thin skin” has led to various distractions – eg, around how many people attended his inauguration and “alternative facts”.

Initially investment markets reacted favourably after Trump’s inauguration as many of his orders were pro-business, but the travel ban has seen uncertainty creep in around whether the new administration knows what it is doing (the ban seems to have been poorly thought through in terms of implementation and legalities as it was not vetted by the bureaucracy first) and around how isolationist Trump is prepared to take the US. Quite clearly Trump is a different kind of US President to the norm. This note looks at the main issues of importance to investors.

Donald Trump’s presidency comes with a number of risks:

These risks are real but shouldn’t be exaggerated. In assessing Trump there are several key things investors need to allow for.

Second, he is not a traditional Republican president. Some of his policies are classic Republican – lower taxes, deregulation – but some borrow from the left – infrastructure spending or even old-fashioned protectionism. Despite some comparisons to Ronald Reagan, he lacks Reagan’s consistent ideology. He will follow his own course.

Third, his support base is middle America. Supporting them with jobs and higher wages is critical. Getting stuck in a trade war with China and Mexico that just pushes prices up at Walmart by 20% won’t go down well with his support base.

Fourth, he has a loud and more direct approach to communication – what some call a huge megaphone. And he has no constraint in using it against politicians or companies who get in his way. Related to this his open mouth approach is prone to reversal – think about his comments about locking Hilary Clinton up, border adjustment tax (initially “too complicated” but now working on it) and torture (initially supporting it and then leaving it to his Defence Secretary). We have to get used to a lot more noise coming out of Washington, but the key is that much of it will be just that: “noise”.

Fifth, he is a businessman who prides himself on his negotiating skills. So, for example, the imposition of a tariff on imports from China or Mexico may just be the opening gambit in a negotiation designed to extract a better trade deal for the US rather than necessarily being the final outcome.

Finally, his time to get his legislative agenda through Congress is limited. The President’s party normally loses control of it in the mid-term elections (as Obama did after his first two years) – so he doesn’t want to waste too much time.

Given all this, I remain of the view that despite the rough start the pragmatic growth focussed Trump will ultimately dominate the populist Trump. But we have to allow that it will take a while for pro-growth policies to be legislated – eg, the President and Congress may not agree a tax reduction package until later this year – and that fears of trade war are likely to get worse before they get better as Trump embarks on a tough negotiating stance. This should ultimately be supportive of US/global growth, but there will be volatility (and noise) along the way.

After their large gains from around the US election, share markets, the US dollar and bond yields all entered 2017 with a degree of vulnerability. Shares, for example, had become technically overbought, and short-term measures of investor sentiment had risen to levels of optimism that are often associated with a correction. See the next chart for US shares which tracks a measure of short term investor sentiment based on surveys of investor optimism and demand for option protection against the US share market. 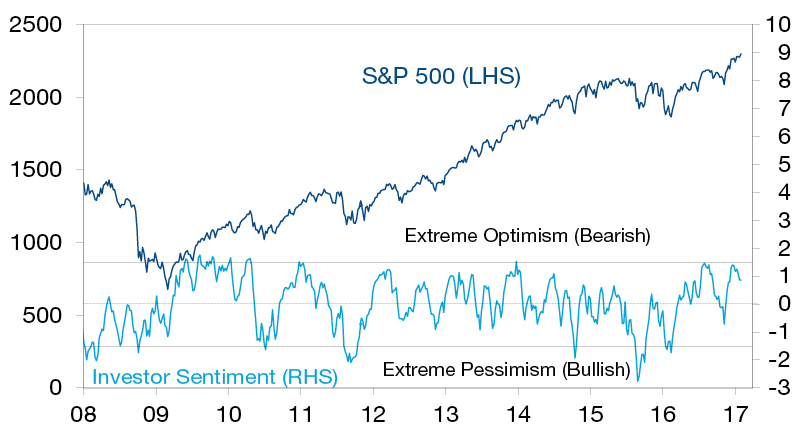 Since Trump’s election played a part in the rally, it was always likely that a period of uncertainty about what Trump would do – whether we get the pragmatist or the populist – could drive this, and this seems to be the case. This in fact is not out of line with the historical experience where US shares in the first February of new presidents have had an average decline of 4% since Hoover in 1929. Of course, other factors played a role: with the Great Depression for Roosevelt; the start of the tech wreck for G W Bush; and the tail end of the GFC for Obama exaggerating the declines they saw. But the pattern of an initial period of uncertainty, often around communication mistakes, is apparent.

US S&P 500 in first February of new US presidents 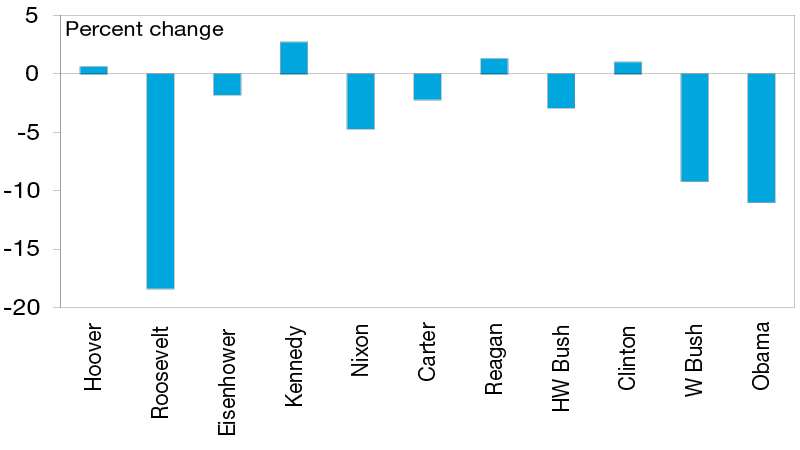 However, despite the likelihood of a bout of short-term market turbulence we see share markets trending higher over the next 6-12 months helped by okay valuations, continuing easy global monetary conditions, some acceleration in global growth, rising profits in both the US and Australia as Trump’s pro-growth policies start to impact.

Debate about a “border adjustment tax” in the US is heating up, but what is it? Basically many countries including Australia and Europe have a consumption tax – which only taxes goods and services consumed in the country. So imports are taxed, and exports aren’t. The US has state based sales taxes, but these are not the same as a consumption tax. In part to address the imbalance and at the same time lower America’s corporate tax rate from a globally high 35%, House Republicans have been working to move the US corporate tax system to only tax activity relating to goods and services consumed in the US. This would entail taxing imports and rebating tax on exports, ie, undertaking a “border adjustment”, just like when tourists show up at the airport when leaving Europe for a tax refund on goods they have bought there. Such an approach would make it harder for companies to lower their taxable income (via transfer pricing), redress the imbalance where the US does not have a consumption tax but other countries do, and because America imports more than it exports it would enable a lower corporate tax rate with talk of a 20% rate.

Trump initially rejected the idea as being “too complicated” but appears to have come round to it lately. However, it’s not clear Republican senators would support it and there is a long way to go. But if it does get up it would be a huge boost for US exporters (eg, Boeing) and a huge negative for importers (eg, Walmart) and would put significant upwards pressure on the $US which could then nullify the border adjustment. Of course, it may also be subject to a World Trade Organisation challenge (although the US may argue most other countries do the same with their consumption taxes) and it would put significant pressure on other countries to move to the same system.

Important note: While every care has been taken in the preparation of this document, AMP Capital Investors Limited (ABN 59 001 777 591, AFSL 232497) and AMP Capital Funds Management Limited (ABN 15 159 557 721, AFSL 426455) make no representations or warranties as to the accuracy or completeness of any statement in it including, without limitation, any forecasts. Past performance is not a reliable indicator of future performance. This document has been prepared for the purpose of providing general information, without taking account of any particular investor’s objectives, financial situation or needs. An investor should, before making any investment decisions, consider the appropriateness of the information in this document, and seek professional advice, having regard to the investor’s objectives, financial situation and needs. This document is solely for the use of the party to whom it is provided.

2017 – a list of lists regarding the macro investment outlook

U.S. Presidential results are in

The US Presidential Election 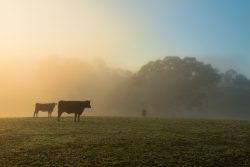 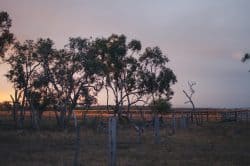 Client Story: aiming for those acres

What support is available to businesses during the Coronavirus outbreak? Keeping up with Super and Savings Benchmarks your investment report card Little Fish, Big Dream