Who can I nominate to receive my super?

Super is the second-largest asset for most Australians, after their family home. To give you the certainty that your superannuation benefits will go to the right people when you die, you can put a “binding nomination” in place.

If you wish to nominate someone who is not a dependant under superannuation law (ie siblings, parents), nominate the estate. Then update your Will to instruct that, once the super money is received by the estate, it is paid to those specified beneficiaries.

You may be interested in this preparing a Will article.

Having a valid binding nomination means that the trustee must pay the nominated beneficiaries as directed by you, as long as they qualify as dependants at the relevant time, and the nomination is current.

Having a valid binding nomination speeds up the payment of benefits when you die and provides certainty that your wishes are carried out.

What about a non-lapsing binding nomination?

As mentioned above, binding nominations last three years before they must be renewed. However, there is a new option available in the form of a “non-lapsing” binding nomination, where there is no three-year expiry date (i.e. it does not lapse) and can still be changed and does not need renewing.

So, when you look at a binding nomination, which lasts for three years before renewal is required, if someone forgets to renew it, it then simply reverts to a “non-binding” nomination after this period. This means there is a risk to ones’ estate planning as the super fund trustee becomes responsible for the management of their super savings on their behalf.

What happens if I don’t nominate anyone?

If you don’t nominate someone specifically, the superannuation fund may:

So, your super may end up in the wrong hands. Even if it ends up in the right hands, it will take much longer to get there.

How much tax will my beneficiaries pay on my super?

Another issue to consider is the amount of tax payable on the super death benefit. Superannuation death benefits are tax-free when they are paid directly to “dependants” under tax law. When you nominate your estate, tax may be payable if some of the money goes to beneficiaries who are not dependants under tax law.

If your funds are left to beneficiaries who are not dependants for tax purposes (eg. an adult child), they will be taxed on the taxable component of any death benefits they receive from your super. Under tax law, a “dependant” includes:

This table shows who are dependants under superannuation and taxation law. 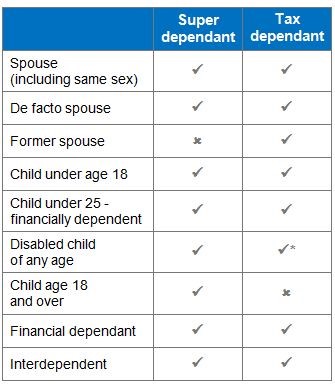 * If also financial dependant or an interdependent

To answer all of these questions, download the guide.

You may also find the following articles useful

want to speak to your adviser?