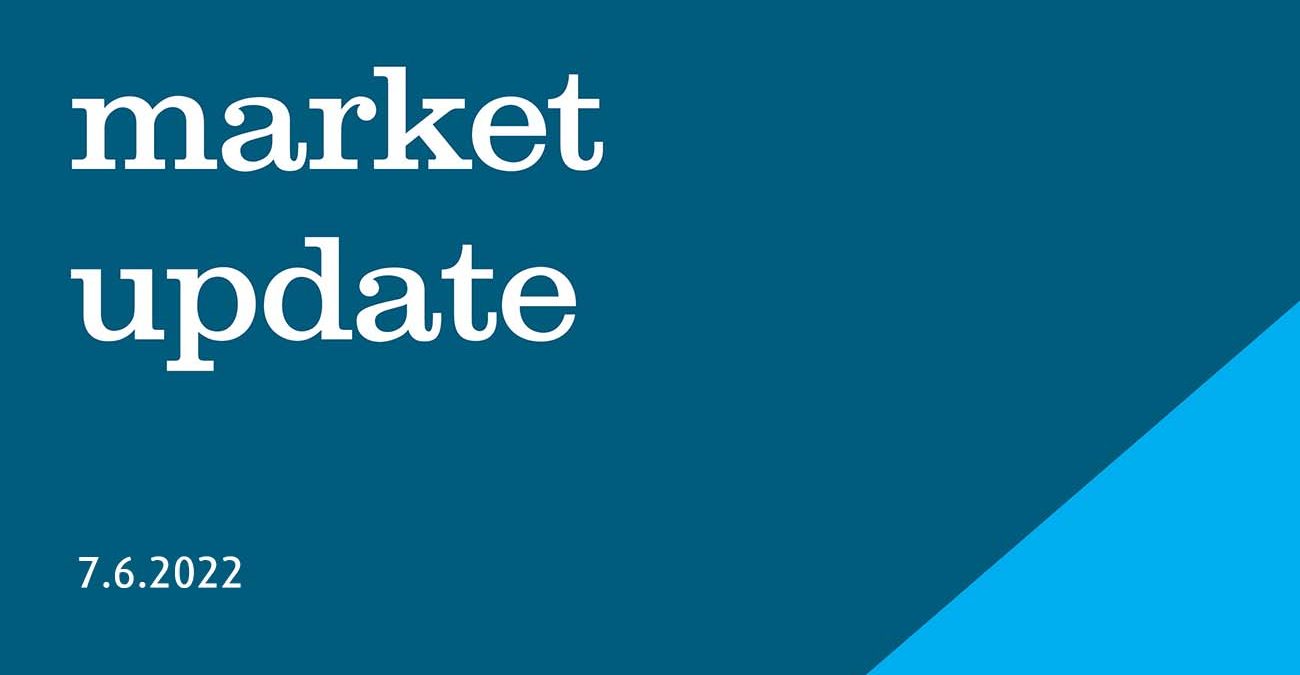 The past financial year was poor for investors as inflation, rising interest rates and recession fears hit investment markets. This note reviews the past 12 months and looks at the outlook.

While inflation was on the rise in the six months to December pushing up bond yields the impact for share markets was swamped by economic recovery from the pandemic and surging share markets so overall returns slowed but were still positive. The last six months have been a lot tougher though:

The net result has been poor investment returns over the last financial year for most listed assets as can be seen in the next chart. 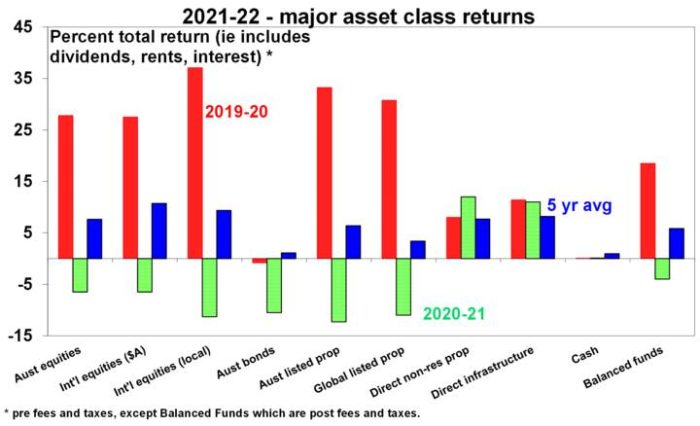 Bonds have had their worst 12-month return in decades as the surge in bond yields resulted in capital losses for investors. Australian bonds lost 10.5% over the last 12 months which is worse than their losses in the “bond crash” of 1994 and looks to be their worst 12 month loss since 1973 or the 1930s. The severity of the loss reflects the low starting point yield and the speed of the rise in bond yields. 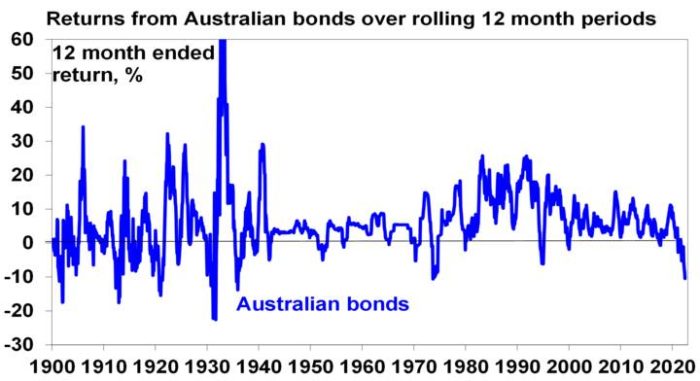 Global shares lost 11.1% in local currency terms. A fall in the growth-sensitive Australian dollar saw this reduced to a loss of 6.5%. Bear in mind this followed gains of 37% and 28% respectively in the previous financial year.

Naturally, the most speculative assets like tech stocks (with Nasdaq losing 24%) and cryptocurrencies (with Bitcoin down 46%) were hit the hardest. But commodities returned 22.5% in US dollars due to strong demand, supply shortages & the war.

Australian shares were also dragged down – particularly as the RBA got more aggressive in raising rates in June – with a loss in the last financial year of 6.5%.

Combined, this drove an estimated average loss on balanced growth superannuation funds of -3 to -5% after fees & taxes. 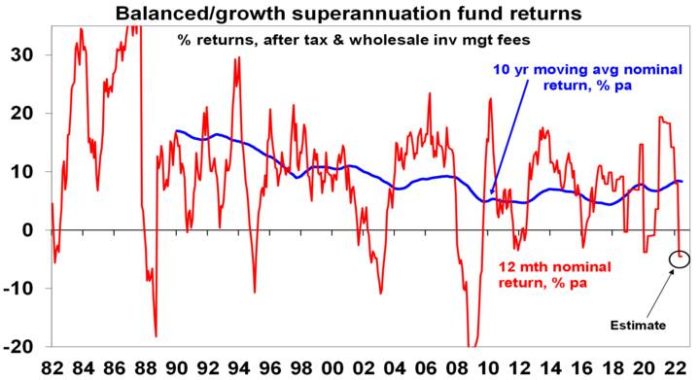 It’s worth putting this in context though as in the 2020-21 financial year balanced growth super funds returned around 18.5% and over the last five years they returned 5.8% pa which is solid given that inflation averaged 2.6% pa.

Conservative superannuation funds are likely to have had a similar or worse loss in the financial year reflecting the hit to bond returns. Normally bonds are a safer less volatile asset class than shares, and so conservative funds tend to have a higher exposure to them than shares. However, every so often bonds have a rough ride at the same time as shares – usually when inflation is a big problem and central banks are raising interest rates which pushes up bond yields rapidly resulting in negative returns from both fixed income (as bonds suffer a capital loss when yields rise) & shares. The result is that both conservative and balanced growth funds can have poor returns in such environments as we have seen over the last year.

The last time we saw something similar with poor returns from conservative and balanced funds was in the bond crash of 1994 when inflation fears saw central banks including the RBA raise interest rates aggressively from emergency levels after the early 1990s recession. This time around inflation has been much higher and bond rates have increased from even lower levels and so it’s been even more severe for bonds.

The big lesson from 2021-22 was that inflation – long thought to be dead and a baby boomer nightmare from the 1970s – was just resting and can raise its ugly head when the circumstances are right. And the last year showed just how much damage it can do to assets like bonds and shares if it gets out of control. The good news is that central banks are taking the threat seriously providing confidence that permanently much higher inflation will be avoided (and that bonds may go back to being a good diversifier for shares). Given the disaster the 1970s was for economies and investments I would rather endure the short-term pain of putting the inflation dragon back in its cave than let it continue to roam free torching economies and investments.

The bad news is that inflation is still rising (and expected to rise to 7%yoy in Australia this year) and where it’s not it’s still too high for comfort (eg with core private consumption deflator inflation in the US at 4.7%yoy), inflation expectations still risk breaking higher which would make it even harder to get inflation back down and central banks “unconditional” (in the words of Fed Chair Powell) focus on keeping inflation expectations down and returning inflation to target means even higher interest rates which are resulting in rising risk of recession. And risks remain high around the war with Ukraine particularly with Russia seemingly starting to reduce gas flow to Germany.

So the bottom line remains that until there is clear evidence inflation is falling central banks will continue tightening, keeping recession risk high. And if a recession eventuates shares likely have more downside as earnings start to fall, because the falls in markets so far mainly reflect a valuation adjustment (ie lower PEs) in response to higher bond yields. Given the uncertainties, it’s still too early to say that shares have bottomed. The September quarter is traditionally weak for shares which suggest shares could still fall into September or October.

Slowing economic data globally, as highlighted by a decline in the US ISM index, signs that US core inflation and wages growth may have peaked and a continuing decline in our US Pipeline Inflation Indicator as upstream price pressures ease – with falling work backlogs, freight rates, metal prices and grain prices – are positive signs in that they suggest pressure may come off central banks later this year enabling them to ease up on the interest rate brake in time to avoid a recession.

In Australia, low consumer confidence and falling home prices indicate monetary tightening is already starting to get traction reflecting higher household debt levels and that the tightening started last year with rising fixed rates as the RBA ended its yield target. This in turn is likely to limit how much the RBA needs to, and will, raise rates to well below the 3.5% plus cash rate that the futures market has factored in. We continue to see the cash rate peaking at around 2.5% in the first half of next year.

So while share markets could fall further in the next few months, cooling demand and reducing supply bottlenecks hence cooling inflation pressures could start to take pressure off central banks later this year thereby avoiding recession (or at least a severe recession) and enabling share markets to move higher on a 12-month view.

Things for investors to keep in mind

Of course, short-term forecasting is fraught with difficulty and it’s best to stick to sound long-term investment principles in times of uncertainty. Several things are worth keeping in mind at present: setbacks in shares are normal; selling shares or switching to a more conservative super strategy after falls just turn a paper loss into a real loss; when shares and other investments fall in value they are cheaper and offer higher long term return prospects; Australian shares still offer an attractive dividend yield versus bank deposits; shares and other assets often bottom with maximum bearishness; & during periods of uncertainty when negative news reaches fever pitch it makes sense to turn down the noise around investment markets in order to stick to an appropriate long term investment strategy.