In the US the Fed has flagged that it’s likely to announce the start of tapering its bond-buying at its meeting this week. This is likely to see its current bond and mortgage-backed securities buying program of $US120bn a month reduced by $US15bn a month such that it ends by mid next year. The Fed’s post-meeting statement and press conference is also likely to be a bit more hawkish reflecting more concern about inflation and rate hikes are likely to start in the second half of next year.

And in Australia, having reduced its weekly bond buying from $5bn to $4bn, the RBA has now ended its 0.1% yield target for the April 2024 bond (which had helped keep 2 and 3-year fixed mortgage rates around 2%) and implicitly brought forward its guidance on the first-rate hike to late 2023 (previously this was not expected to be “before 2024”).

Missing in this is the Bank of Japan and European Central Bank that both show little sign of moving towards monetary tightening reflecting their history of lower inflation rates.
But the broad hawkish move by central banks has caused ongoing bouts of uncertainty in investment markets – with concern at times that central banks will be too slow to tighten which will see inflation spiral out of control, but at other times concern that central banks will raise prematurely crunching the recovery. So, should investors be concerned?

The move to the exits from easy money reflects three key developments: 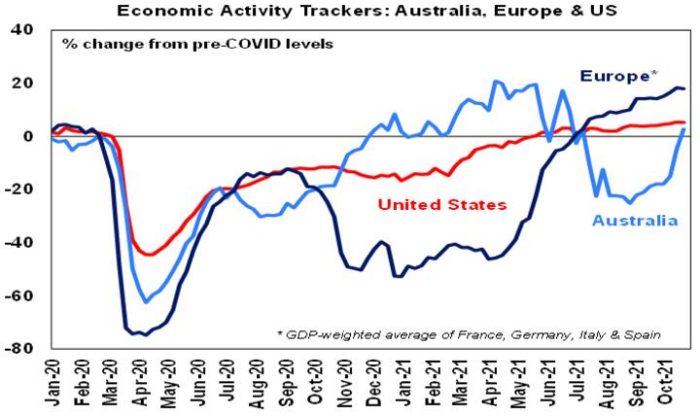 So, in short, the need for emergency ultra-easy monetary conditions is receding.

The removal of monetary stimulus is a sign of recovery

From a broad cyclical perspective, the intensifying shift towards removing monetary stimulus should not be a major concern for investors. Although it does confirm that we have moved into a more constrained and potentially more volatile phase of the bull market in shares that began in March last year. A typical cyclical bull market in shares has three phases:

Right now, we are likely in Phase 2 of the investment cycle. The “easy” Phase 1 gains are behind us. Monetary support is starting to diminish and we are now more dependent on earnings growth. This shifting of the gears from the Phase 1 valuation driven gains typically sees some slowing in average share market gains. But the trend remains up and we are likely still a fair way away from the unambiguous overheating and exhaustion evident at the end of a bull market. In this context: 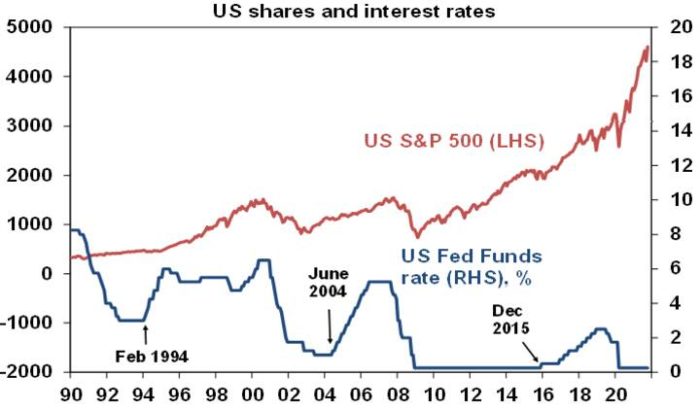 The main risk is supply constraints

Of course, the main risk is that this time is different due to supply constraints resulting in much higher for longer inflation necessitating aggressive monetary policy tightening over the next six to 12 months. The most likely scenario is that, as workers return to work with reopening (and backpackers and immigrants return to Australia) and consumer demand swings from goods back to services with the reopening, goods supply bottlenecks will start to recede allowing the spike in inflation to recede later next year. Of course, this could take 6 to 12 months to work itself through, but it should ultimately delay the need for an aggressive tightening in monetary policy.

Key things to watch are labour force participation (if it starts to rise again in the US signalling an end to the so-called “Great Resignation”), wages growth (if it becomes broad-based), energy prices (coal and gas prices have fallen back lately which is a good sign), computer chip prices (with some signs that shortages are abating) and demand for goods versus services.

While the RBA does not see the conditions being in place for a rate hike (sustained 2-3% inflation, full employment and 3% or more wages growth) until late 2023, it has effectively brought forward its assessment from 2024. And we expect that the conditions could be in place by late next year and so are allowing for two rate hikes in November and December 2022 taking the cash rate to 0.5%. That said, this is still a year away and we agree with the RBA’s assessment that inflation pressures are less in Australia than in many comparable countries. As Governor Lowe points out we have not seen the same fall in labour force participation and the impact of supply bottlenecks has been less in Australia. Additionally, we have a headline and underlying inflation around 3% and 2% respectively, compared to 5% and 3% in many other comparable countries. As a result, we see money market expectations for rate hikes starting mid-next year and taking the cash rate to 1% to 1.25% by the end of 2022 as being too hawkish.

While rate hikes are still a fair way off, the removal of the 0.1% April 2024 yield target implies more upwards pressure on 2 and 3-year fixed mortgage rates. The April 2024 bond yield is around 0.7% which is about 0.6% above where it was a week ago implying up to a 0.6% increase in bank funding costs for fixed mortgage lending, at least some of which is likely to be passed. While this has no impact on existing borrowers it will have an impact on new borrowers & with higher serviceability buffers implies some dampening in housing demand.

The key implications for major asset classes are as follows: