HomeIMarket UpdatesIFive things you need to know about the Australian economy

Five things you need to know about the Australian economy

For years now, many have told us that Australia is heading for an imminent recession. By contrast official forecasts have long been looking for several years of above trend growth. In the event neither has happened and we don’t see them happening anytime soon.

Against this backdrop there are five things you should know about the Australian economy.

First – the economy grew solidly over the last year

After several years of muddling along the Australian economy actually perked up over the last year with GDP growing a surprisingly strong 3.4% year on year, its fastest since 2012. That growth has been able to range between just below 2% and just above 3% over the last six years despite a large drag on growth from the fall back in mining investment is actually pretty good. But it’s below the norm for Australia, which has averaged around 3% GDP growth per annum over the very long term. It should also be remembered that strong population growth has been one of the reasons for the relative resilience of Australia’s economy, but over the last year per capita GDP growth at 1.8% has been running below that in the US and in line with that in Europe.

Second – growth is likely to slow a bit from here

While economic growth averaged a strong 1% quarterly pace in the first half of the year it’s likely to slow going forward: Third – but it’s not going into recession

Despite these drags, recession will continue to be avoided just as it has been over the past 27 years: 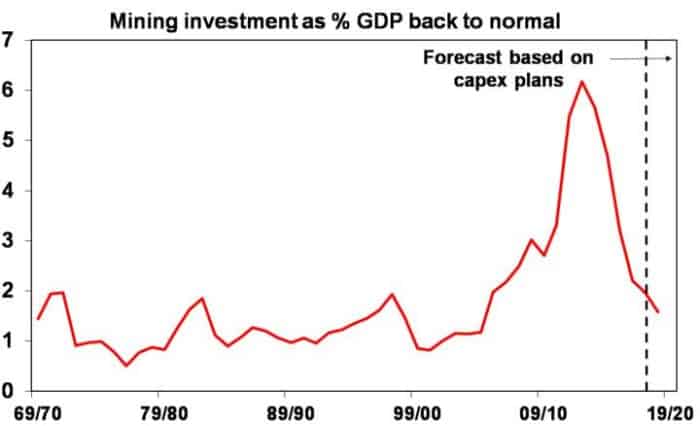 So while housing construction will slow and consumer spending is constrained, a lessening drag from mining investment and slightly stronger non-mining investment along with solid export growth provide an offset and are expected to see growth between 2.5-3% going forward. Down from over the last year and slower than the RBA expects, but stronger than many doomsters see.

Fourth – spare capacity will remain for a while yet

With the economy’s potential (or sustainable) growth rate running around 2.75% and actual economic growth likely to run around this spare capacity in the economy will be with us for a while yet. To use it up we really need a long period of above trend economic growth, but this looks unlikely. Spare capacity remains most obvious in the labour market where the underutilisation rate remains historically high at near 14%. With it likely to remain high for some time to come it’s hard to see much acceleration in wage growth or inflation in the economy. Fifth – which means RBA rate hikes are a long way off

The RBA’s forecasts for continuing solid economic growth and a gradual rise in underlying inflation argue against a rate cut and support the case for an eventual hike. But our more constrained view on growth implying lower for longer wages growth and inflation along with the risks posed by likely further falls in Sydney and Melbourne home prices, tightening bank lending standards and the drought indicate a rate hike is unlikely to be justified any time soon. The next move in rates is probably still up but not until second half 2020 at the earliest and there is a risk that the next move will actually be down if falling home prices pose a significant threat to consumer spending and inflation starts falling again.

There are several implications for Australian investors.

Second, bank deposits are likely to provide poor returns for investors for a while yet.

Third, while Australian shares are great for income, global shares are likely to remain outperformers for capital growth.

Finally, the outlook remains for a further fall in the $A. With the RBA comfortably on hold and the Fed raising rates every three months (with the next move coming this month), the interest rate gap between Australia and the US will go further into negative territory making it even more attractive to park money in the US and not Australia which will drag the $A down. Threats to global growth from a trade war and problems in emerging countries will also weigh on the $A.

Get in touch with Invest blue to discuss more the housing cycle of the Australian economy.