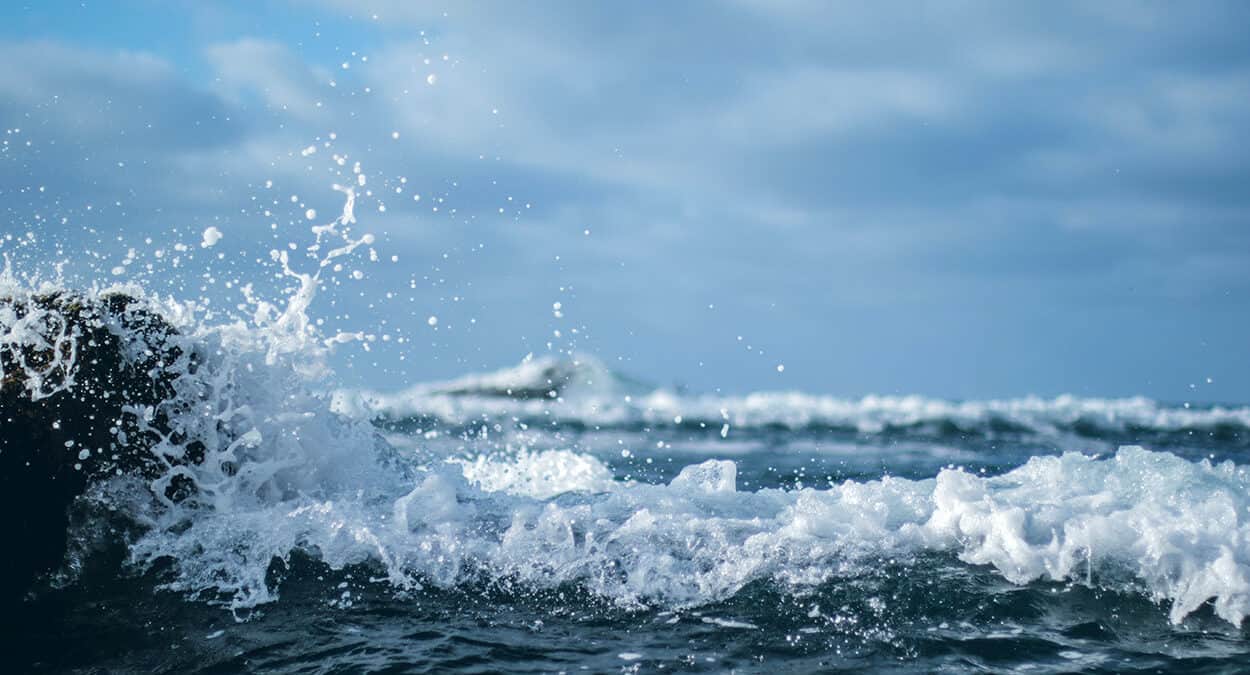 HomeIMarket UpdatesIHow worried should investors be about a “second wave” of Coronavirus cases?

How worried should investors be about a “second wave” of Coronavirus cases?

The past week has seen a flurry of concerns about a “second wave” of coronavirus cases. It started when US infectious disease expert Anthony Fauci warned the coronavirus outbreak is not over and media started to focus on more than 20 US states seeing a rising trend in new cases, and then over the weekend, China reported a cluster of cases in Beijing around a market. Mass anti-racist protests have probably added to the renewed unease. (While there is no place whatsoever for racism, unfortunately in the current environment, large protests that gather people together, increase the risk of the virus spreading). And even in Australia, we have seen new clusters – mainly in Victoria – although the daily number of new cases remains around or below 20, so it’s not a major issue in Australia. See the next chart. 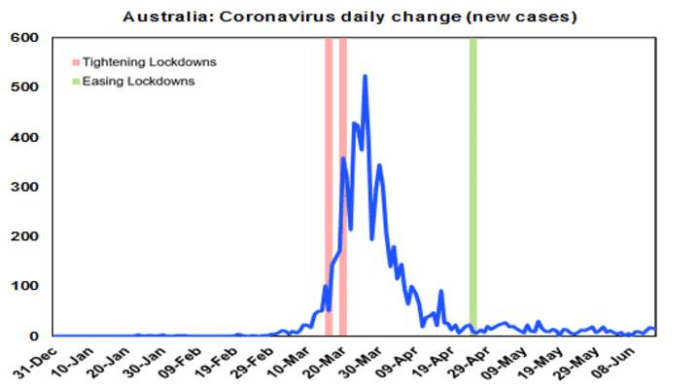 These second wave concerns have come at a time when share markets had become vulnerable to a pullback after huge rallies since the coronavirus panic low around 23rd March which had seen US shares gain 44% and Australian shares rise 35%. We discussed this last week in Shares climb a “wall of worry”. And so, shares have seen a 6 to 7% correction in the last week before recovering some of that decline in the last few days.

After major bear market lows associated with recessions its common for shares to surge higher, get very overbought, and then see a pullback on concerns about a “double-dip” back into recession. The pullback then sees shares shake off some excesses which then allows the rising trend to resume. Second wave virus concerns and fears it may result in a renewed lockdown and double-dip in economies looks to have triggered the pullback over the last week. But the question is whether it’s just a correction in a rising trend or will it turn into another big leg down in shares? A key determinant could be how serious any second wave is. This note looks briefly at the main issues.

But first, where are we with coronavirus globally?

While worries about coronavirus perked up over the last week, there has been little change to the broad trends in terms of coronavirus cases. New cases continue to trace out an uptrend globally, driven by emerging countries, but new cases in developed countries are well below their early April highs (and this played a big role in the rally in share markets since March). 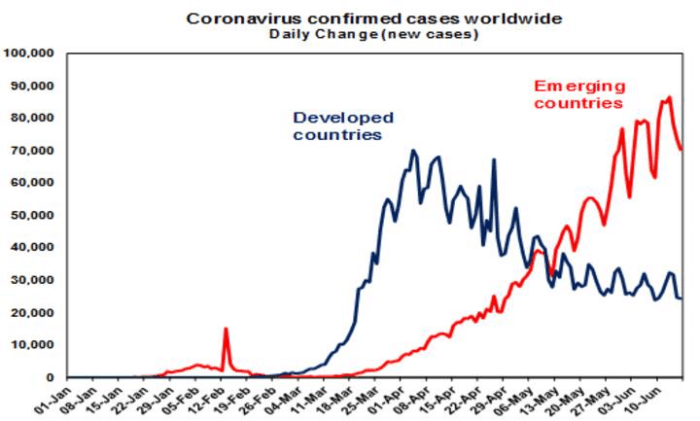 What about a second wave in the US?

The US is at greater risk than most other developed countries of a second wave because reopening started before a sharp downtrend in new cases had really taken hold and many US states moved ahead of the US Government’s own medical guidelines to reopening. Around 23 states are seeing an increase in new cases (with about half just seeing a continuation of the initial rising trend and the rest seeing “second waves”). However, there are several points to note.

First, the total number of new US cases on a daily basis has been relatively stable fluctuating in a range around 20,000 to 25,000 for a month now, with some states seeing falls and others rise – so there is nothing really new here. 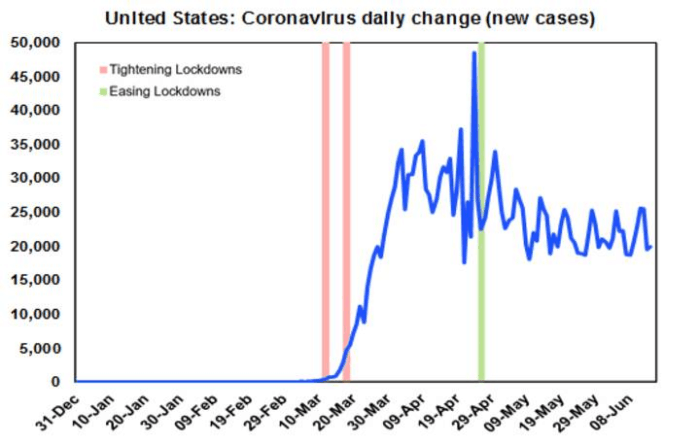 Basically, a rising trend in new cases in southern states (including Texas, Arizona and Florida) and to a lesser extent in western states, has over the last month offset a falling trend in the north east (led by New York) and the mid-west to result in a flat trend overall. And so far, the cities that saw big protests recently have not seen an increase in new cases. 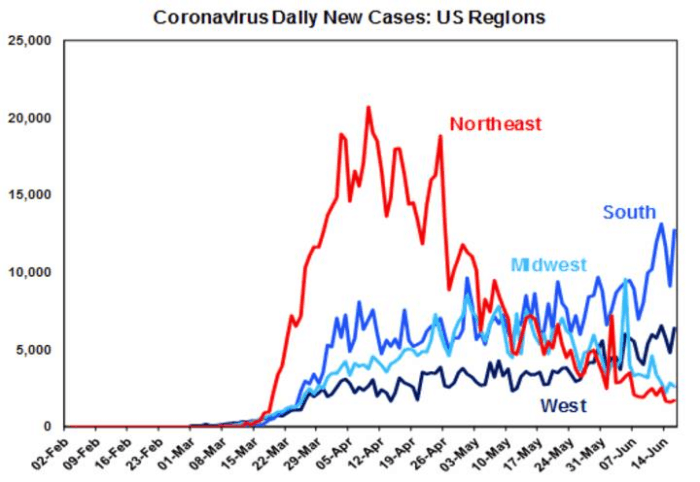 Second, the rise in cases in the south and west is partly due to an increase in testing with the positive test rate stable to slightly down over the last month in the US as a whole (although some states have seen an increase in positive test results including Washington, Arizona, Utah, Texas and Florida).

Third, hospitalisations and new deaths have been trending down. This is not the case in all states (notably Texas and Arizona are on the rise in terms of hospitalisation) but overall it suggests less pressure on the health system. As can be seen in the next chart, daily deaths have been trending down both in the north east and in the rest of the US. 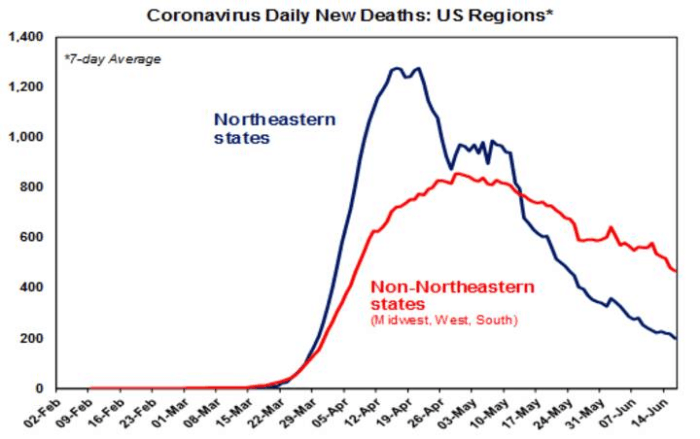 Fourth, the lower level of deaths in the US (both in the northeast and the rest of the US) despite a flat trend in new cases, may reflect that the US has learned to better manage new cases and treatments to minimise hospitalisation and deaths. Note that we are seeing more reports of breakthroughs in the treatment of coronavirus and over 100 trials of vaccines around the world.

Finally, the hurdle for a renewed shutdown may now be greater with people suffering quarantine fatigue. A more targeted approach may be more likely (at least initially).

The bottom line is that it’s inevitable that some US states will see flare-ups, but as long as hospitalisations stay manageable and deaths stay down a return to a broad-based lockdown threatening a double-dip in economic activity in the US is low.

In the meantime, this week’s move by the Fed to start buying corporate bonds directly through its main street lending program (called the Secondary Market Corporate Credit Facility) has underpinned the degree of liquidity support for the US economy that wasn’t there when coronavirus first flared up.

What about the second wave in China?

Over the last three days, China has reported an average of 50 new cases a day compared to an average of seven a day over the prior 30 days. Most of these have been linked to a Beijing market with the possibility that the virus may have been connected to salmon imported from Europe. In response, several areas of Beijing have been locked down with schools closed and restrictions placed on people leaving the city. This could escalate into something serious. Then again, there have been several flare-ups in China in the last three months that have been brought under control with very rigorous testing, tracing and quarantining, as has been the case in South Korea and various other countries including Australia. 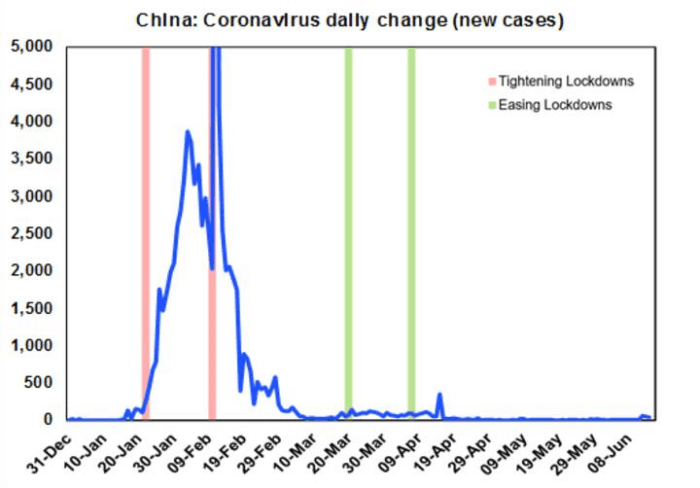 A serious second wave of coronavirus cases in major developed countries is the biggest risk facing equity markets, and one investor will need to watch closely. However, provided any second wave is relatively mild in terms of pressure on health systems and the number of deaths, its unlikely to reap the havoc seen back in March. Particularly, given the degree of government and central bank support now in place. The risk should be able to be minimised with lots of testing, tracking and quarantining. As such, our base case remains that the pullback in shares over the last week is part of a correction in a broader rising trend.