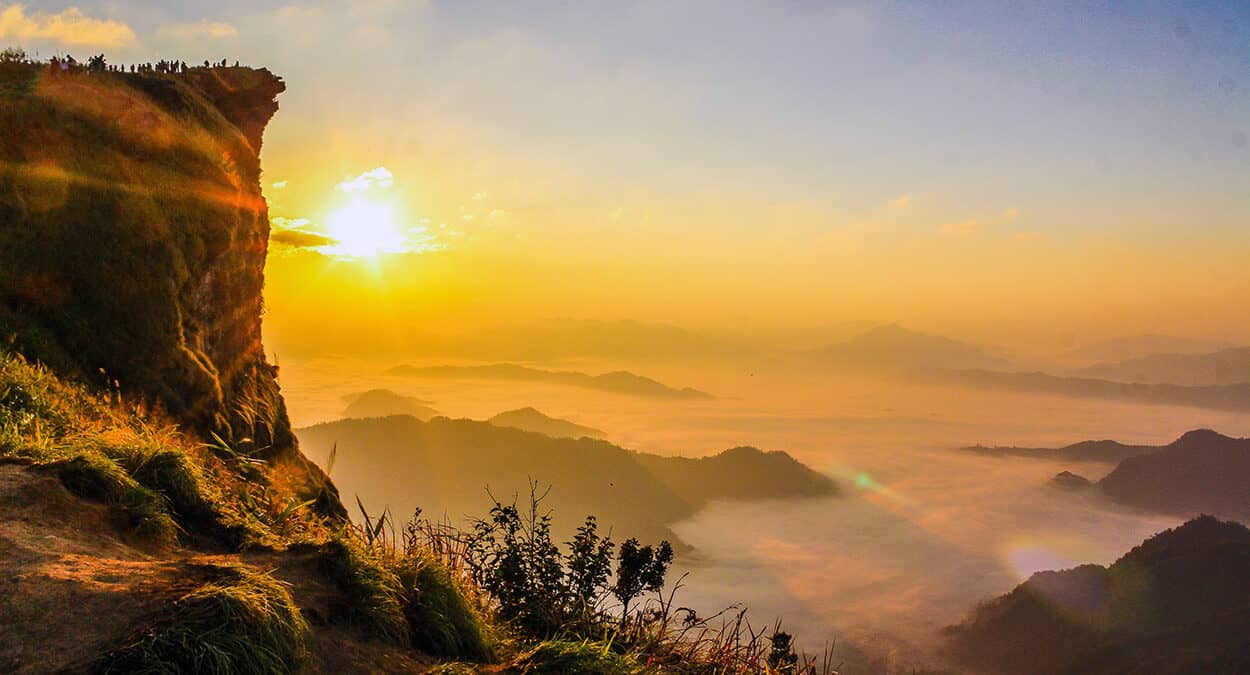 The thought of various government support measures expiring in the months ahead, causing some sort of fiscal cliff over which economies and share markets will plunge, has caused much consternation. But as with the original fiscal cliff of December 31, 2012 in the US, it’s likely to be tapered into a fiscal slope. Particularly with so called “second waves” of coronavirus reaping havoc with the economic outlook. Of course, this will add to the public sector’s debt burden associated with the coronavirus shock, in turn adding to concern about some sort of fiscal day of reckoning down the track.

This note looks at the key issues around fiscal support and the budget in Australia ahead of the Treasurer’s Economic Statement (due 23rd July) which is expected to provide new economic forecasts, an estimate of the budget cost of support measures so far and outline plans for future support measures.

Fiscal stimulus to be extended

It made sense for many of the coronavirus government support measures to expire at the end of September as it avoided a permanent/hard to reverse lift in public spending, and to borrow from the analogy likening the support measures to a bridge across a chasm, once the coronavirus chasm has been crossed there is no longer the need for the bridge. However, its increasingly clear that support will be needed for longer: 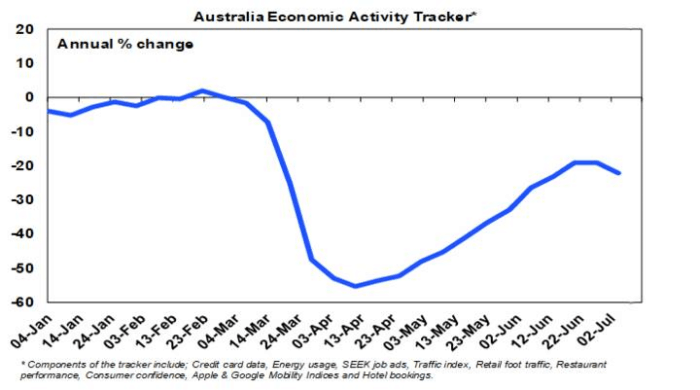 The last two mean that “spare capacity” will linger well into the future and this is likely to show up in a long tail of high unemployment. Without the JobKeeper wage subsidy and changes to JobSeeker, “effective unemployment” would have risen to 14.8% in April and would still be around 13.6% now. 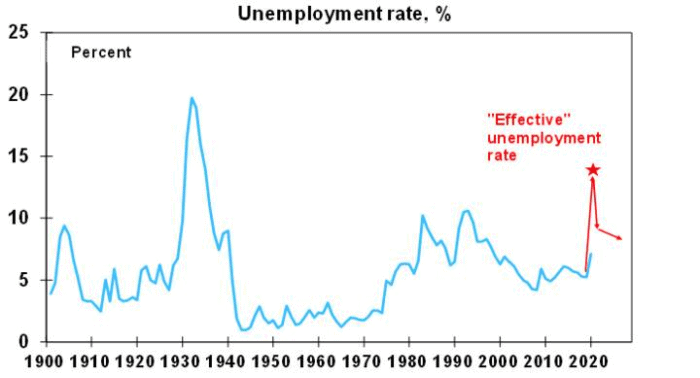 The initial spike in “effective unemployment” may be reversed quickly taking it down to say 9% by year end, but getting it back to 5% as seen early this year could take years as some sectors take a long time to recover and accelerated structural change impacts. This suggests both a short-term and a long-term challenge for government which will likely be met at least in the short term by more fiscal stimulus.

Our revised deficit projections are shown below and take the December 2019 Mid-Year Fiscal Outlook as the starting point.

The hit to the economy will mean a hit to government revenue and this is shown in the line called “parameter changes”. Budget data released for the period to May suggests that this has been running at just over $10bn a month since March.

However, the need for additional support for the economy has also been recognised by the government. As a result, in its 23 July economic statement we are likely to see:

The Government will partly fund extra support by taking JobKeeper from those who no longer need it, but the bulk will likely come from the $60bn saving already seen on JobKeeper, which we expect to be fully spent and then some (see “new stimulus”) although it may not all be announce next week.

As a result of the Government’s fiscal response and the hit to public revenue from the economic downturn, the budget deficit is expected to blow out from around $95bn for the past financial year to around $223bn this financial year before improving from 2021-22, as support programs phase down and the economy recovers. This would see the budget deficit as a share of GDP peak at around 11% of GDP in 2020-21, which would be its highest since World War 2. Spread over several years, this will add nearly 20% of GDP to Australia’s public debt. This raises two questions though: will it be enough? And can we afford it?

Will it be enough?

By extending programs like JobKeeper beyond September and announcing additional stimulus including the likely bring forward of tax cuts, the Government will effectively taper the fiscal cliff and turn it into more of a slope. This helps solve the short-term reality that a lot of jobs won’t have come back by October. However, it remains to be seen whether this will be enough given the long tail of unemployment flowing from the coronavirus shock discussed earlier. The Government’s focus looks likely to shift to economic reforms in the October budget and this makes sense, but more fiscal support may ultimately be needed to soak up the likely long tail of unemployment.

Can we afford the surge in the deficit and debt?

Our assessment remains that it is affordable. First, were it not for the support measures the economic hit would be far greater, ultimately resulting in an even bigger public debt blowout.

Second, as Keynes showed, it makes sense for the public sector to borrow from households and businesses at a time when they have cut their spending, and to give the borrowed funds to help those businesses and individuals that need help.

Fourth, Australia’s starting point for net public debt was low at 23% of GDP compared with other advanced countries averaging 83%. See the next chart. And even with projected budget deficits it will remain relatively small.

Fifth, borrowing to finance the budget deficit is in Australian dollars and, with a current account balance, we are not dependent on foreign creditors risking a foreign currency crisis.

Sixth, the cost of Government borrowing is very low at less than 1% for ten years. This is partly being facilitated by the RBA buying bonds, but bond rates would be low anyway.

Finally, consider what would happen if “shock horror” the Government and the RBA agreed to cancel the bonds that the RBA owns? Apart from a lot of grinding teeth from some commentators the answer would be very little – the Government’s loss on its “investment” in the RBA would be offset by a reduction in liabilities. In other words, it’s not necessarily the case that all public debt has to be paid back if it’s owned by the central bank. For the technically minded, the limit to this would be if all the extra money that the central bank printed to buy the bonds causes inflation – but as Japan has seen, if there is lots of spare capacity, inflation is not an issue.

With the private sector spending hit by coronavirus it makes sense for the Government to continue to help fill the breach and support the economy. The best approach to getting debt back down is to grow the economy aided by a reinvigorated economic reform agenda, but for a while government fiscal support will continue to be needed.