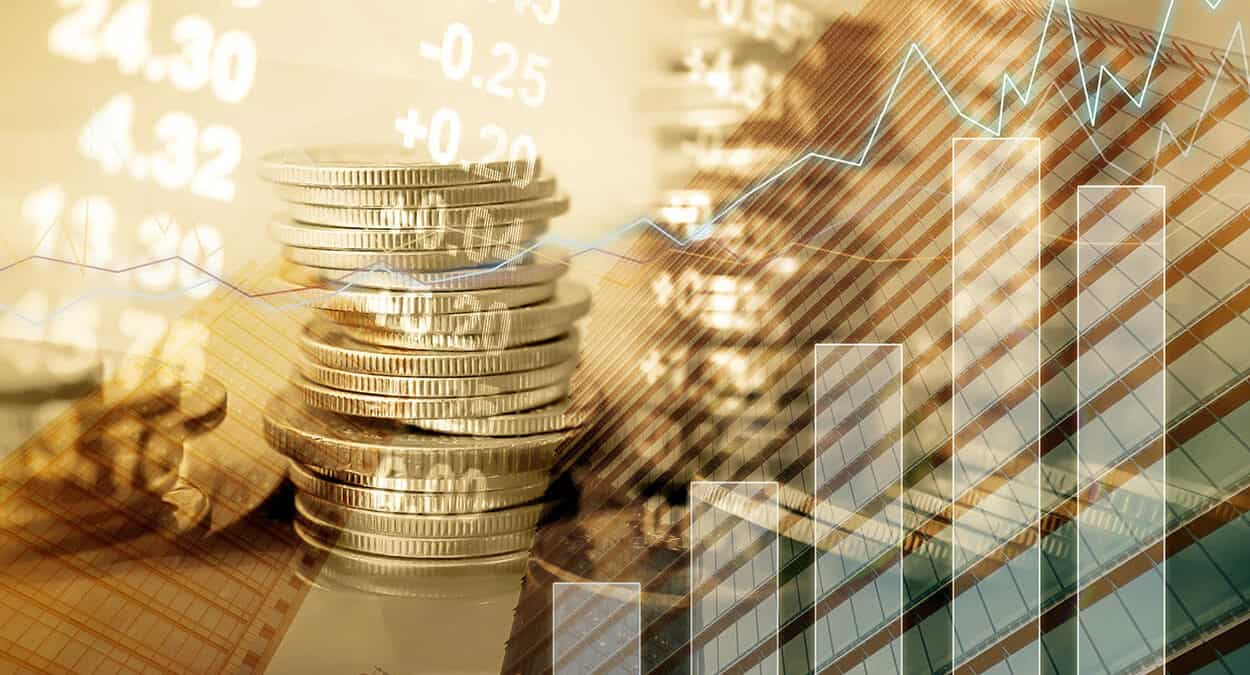 HomeIMarket UpdatesIUS dollar breaking down, gold and the $A breaking up – what does it mean for investors?

US dollar breaking down, gold and the $A breaking up – what does it mean for investors?

The price of gold has now broken out to a record high and the Australian dollar has risen 30% from its coronavirus panic low in March and broken above $US0.70. What’s driving this and what does it mean for investors? This note looks at the main issues.

The US dollar looks to have peaked

The recent surge in gold and the Australian dollar have one thing in common – namely an emerging breakdown in the US dollar. The $US surged during the early phase of the coronavirus panic in response to safe-haven demand. The US economy has less exposure to cyclical sectors (like manufacturing, materials and financials) and greater exposure to growth sectors like IT & health (that benefit from coronavirus) compared to the rest of the world. This means capital flows into the US when global growth slows and back out again when it picks up. Right now, the $US looks to be breaking down. 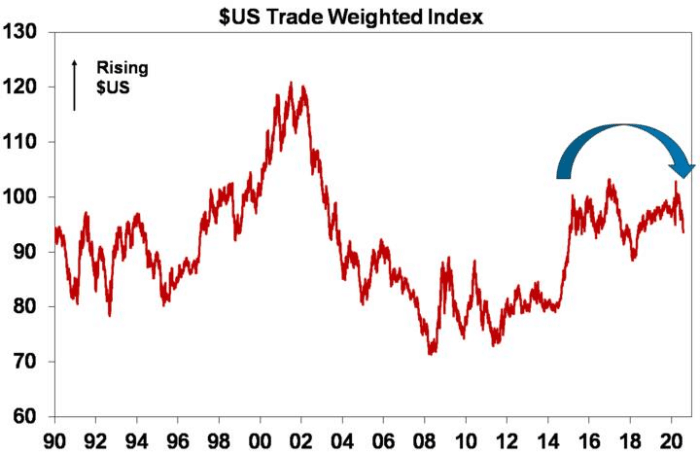 From its March coronavirus panic high the US dollar index has fallen 9%. There are several reasons why the US dollar has likely peaked and will decline over the next six to 12 months.

Historically, a falling US dollar is often seen as a sign that global reflation is working and that confidence may be gradually returning regarding the outlook for the global economy. If the $US has peaked then its good news for emerging countries (which often have US dollar debt) and positive for commodities including gold, and consistent with a rising trend for the Australian dollar – both of which we are now seeing. This partly reflects the reality that it’s all relative and so a falling US dollar naturally pushes up the price of gold and the $A as they are priced in US dollars. But there are other factors at play as well.

Gold taking out its 2011 record high

The next chart shows the price of gold since 1900 both in nominal and real terms. Until the early 1970s, the US dollar was fixed against gold. This was subject to periodic devaluations, such as in 1934. From the early 1970s to 1980 gold was in a secular upswing as investors turned to gold for protection against inflation. However, from 1980 to 1999 gold was in a secular downtrend as inflation was brought under control. The 2000s saw gold enter another secular upswing in line with other commodities and despite a brief interruption at the time of the GFC, this got a further push along with the Eurozone debt crisis and more central bank monetary easing into 2011 which saw gold peak at $1921 in 2011. But this gave way as global growth improved with gold falling into 2015. However, since then, gold has surged again and has now surpassed its 2011 high, albeit its yet to take out its 1980 price peak in real terms of $US819 in today’s prices (albeit it was just a one-week spike). 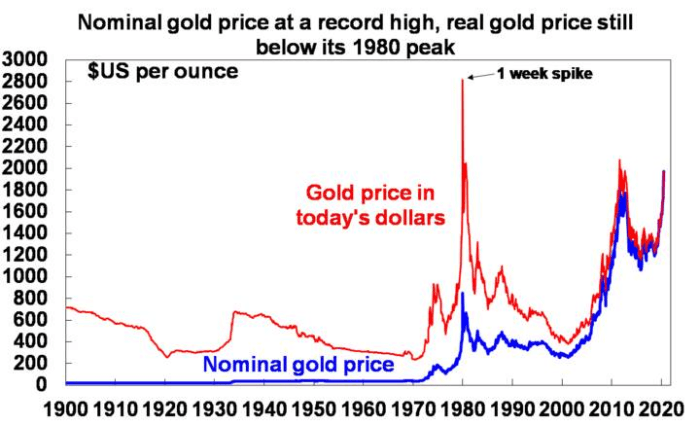 Along with the fall in the US dollar several other factors have helped push the price of gold up:

Gold likely has more upside until central banks start to tighten and bond yields rise significantly, which looks to be a while off.

Some might see the surge in the gold price as a bad sign, but given the mixed factors driving it higher, it’s ambiguous as to whether its good or bad. But the fall in the $US is more clearly a positive than a negative in terms of what it signals about the global economy and falling safe-haven demand from investors.

There are numerous ways to get exposure to gold, all with their pros and cons:

But it is worth stressing that gold is highly speculative. It’s not grounded by an income stream like most shares, property, bonds and cash. Virtually all the gold ever produced still exists and can potentially come back on to the market. At the same time, actual production and demand for jewellery and industrial use is trivial relative to the huge gold stock. As a result, ‘animal spirits’ can play a huge role in the determination of the gold price. This can make for a volatile ride and history has shown that the gold price goes through long term upswings and downswings. So overall, we think there may be a role for gold in investors’ portfolios as a hedge against major paper currency weakness/inflation, but it should be limited to maybe no more than 5% (depending on an investors’ circumstances).

Five reasons why the $A is likely to head higher too

The $A has broken above $US0.70 having bottomed out at the height of the coronavirus panic in March at around $US0.55. Just like gold, it’s being driven higher by a combination of:

For all these reasons I expect the Australian dollar will continue to rise and is likely to be above $US0.75 by year-end.

At this point, the Australian dollar is still around fair value (which is around $US0.73 based on purchasing power parity) and the rebound is consistent with underlying fundamentals such as commodity prices. But if it rises rapidly above fair value in the absence of fundamental support such that the RBA starts to see it as a threat to the recovery, expect it to respond with more quantitative easing, not negative rates and foreign exchange intervention as the RBA is not keen on either of these. 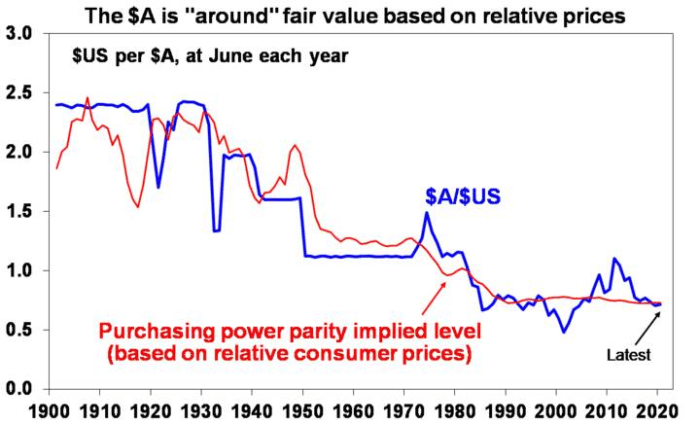 What does a rising $A mean for Australian investors?

Basically, it means that the case to maintain a large exposure to offshore assets that are not hedged back to Australian dollars has weakened. Of course, maintaining a position in foreign exchange for Australian-based investors against the $A provides some protection should things on the coronavirus front deteriorate badly here in Australia or globally.